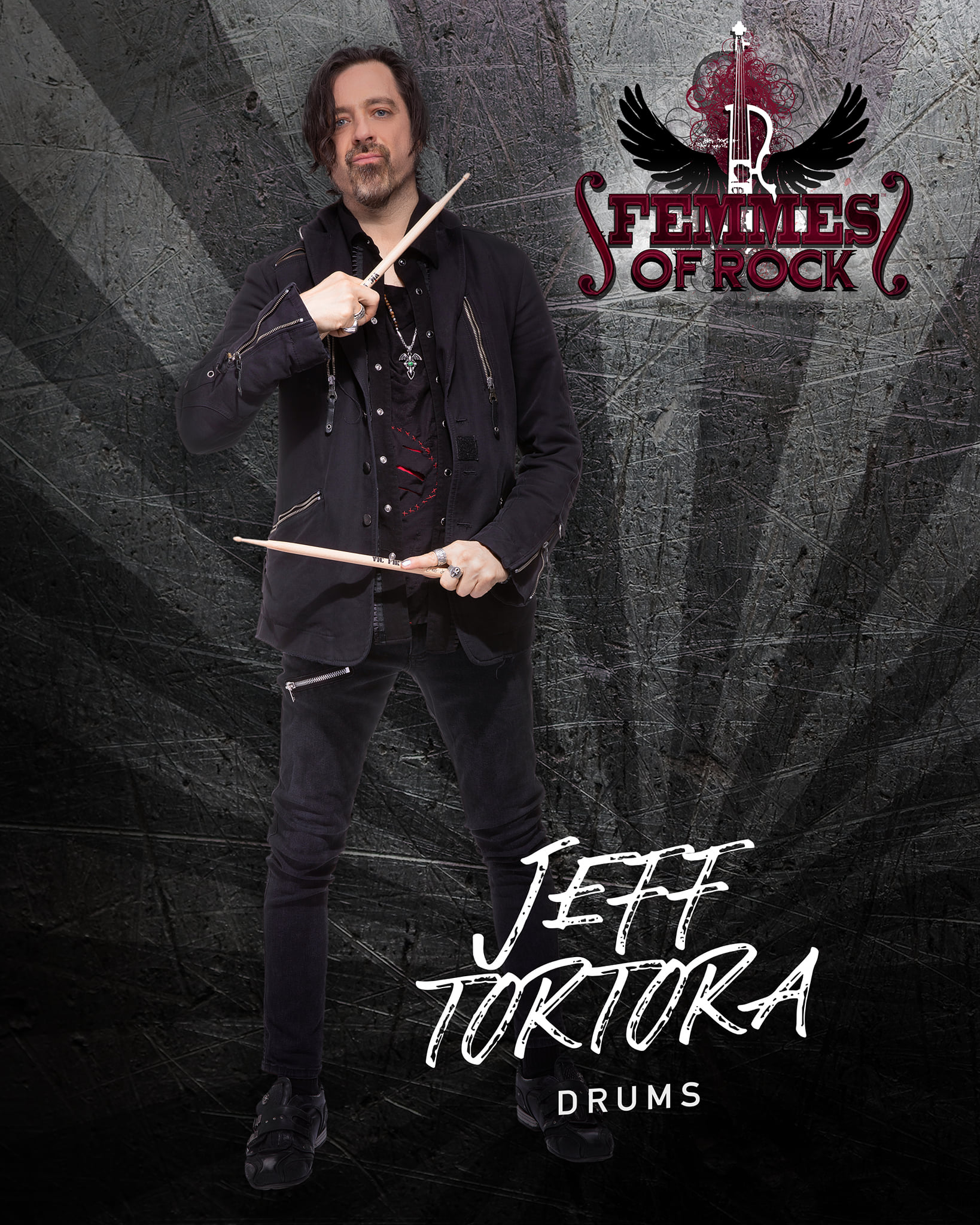 Hi everyone! We are starting to get back into the swing of things, rescheduling dates, and hoping the world kicks some COVID a$$ soon so we can get back to rocking! 🤘🏻

We thought we would give you a sneak peek into some of our new promo, and in doing so, give you an update from each band member as to what we’ve been up to during quarantine.

Today in the spotlight, our drummer Jeff Tortora! He has certainly kept busy keeping his chops up for our next show.

“Greetings from the former and future entertainment capital of the world, fabulous Las Vegas! During this most magnificent time to occupy myself and move forward in the Realm of entertainment creation, I have done a few Preemie syndrome episodes as they are called; drumesque and avant-garde videos edited by my brother Joe, a few live streams including one with Stoney Curtis and Barry Barnes of Count’s 77. I’ve also done one with Oz Fox of Stryper, Frank Dimino of Angel, J.P. Michaels and Pete Sprague of sometimes YBR.

I have done a Blue Man Group Stream performance for Mark Shunock’s Monday’s Dark benefitting the Actors Fund, including fellow Male Femme guitarist Richard Belgard, and a separate one for Hope for the City. I’ve done a couple of live shows filling in on vocals with Punk rock band The Sin City Rejects at Dive Bar, and jammed with the Stoney Curtis band and The Funk jam over at the Sand Dollar in Vegas.

I recorded a cover of Billie Eilish’s “No Time to Die” with Anne Martinez on vocals among other fine musicians at Electric Shop recording studios.

I have been recording a 5 song EP for my new band I am singing in and playing some drums and writing, along with BMG buds Corky Gainsford also of Code Red Riot producing/drumming as well and Tony Carboney Formerly of Otherwise called VEVESI (which means Chaos in Samoan).

We have a song called “You Should be Fine” that will be in the horror movie that I had my acting debut in called Die Influencers Die directed by Gary Orona, and will be released world wide September 1st. Starring Tabitha Stevens, Katie Morgan and Lizzy Borden.

Also, another original band I am in called Elliott Waits For No One released its debut album on Dark Star Records and video for the song “Who Am I” recently with co- partners Jenny Franck and Brian Troch recorded at Vibe House Productions in Wisconsin. Also released recently was double length record by BMG bud Jordan Cohens Sons of Jupiter project that I was a part of per Thaddeus Coreas Jaguar studios. Other than that, I like spending time in nature with my girlfriend, and melting raw Cacao🤡

I do miss the live adventure had by the band and audience that truly can be a magical experience, even with 42 minutes of sleep and multiple flights, this very much includes The Femmes of Rock folk. The talent and personal “personnel” energy amongst the players and crew involved is nothing short of grandiose, and I look forward to performing with them in front of a live audience, in the near future, at a theater near you!

I, and I’m sure I can speak for everyone on this, promise to deliver with no compromise (per usual) a captivating performance with an xtra dash of spice to celebrate the joy of 2020 so far.

Thank you for reading and for your continued support by attending our shows (when they happen again), watching our videos, and supporting the arts in general in whatever capacity you choose.

Ps. I know all you people love to talk with the lovely talented girls who are the Femmes as they are happy to take pictures, chat and sign merchandise. But the handsome men “Of Rock” will gladly do so as well..for a small fee of course 🤣Ha!”