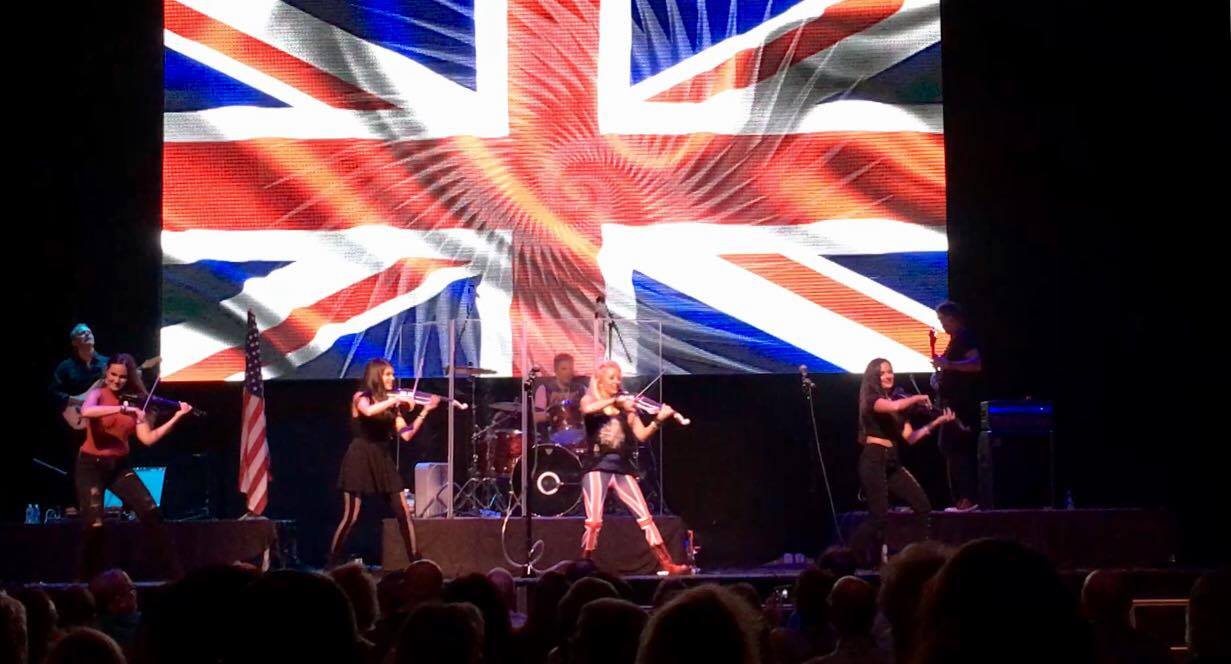 A rainy summer night and this party was a guarantee to go on no matter what. The indoor concert venue The Arcada Theater in St. Charles, was the place to be Friday night. The people packed into the ninety-one year old building for a rock show and Femmes of Rock starring Bella Electric Strings gave them just that.

The upscale concert hall was the perfect setting for a rock concert. The walls are decorated with artists that have performed at the Arcada and other music related items. A drum-set chandelier helped to illuminate the main entrance.

From the moment the show started these young ladies strutted their stuff around the stage and played with precision. Each move was well rehearsed. With a pumped up audience to play for, this incredible band performed some of the coolest classic rock songs ever written.

“Kashmir” seems to be a perfect song for this band to play. The Middle Eastern feel is such a natural fit for the violin. These top notch players made a version of Led Zeppelin’s masterpiece that was a perfect opener. Only thought was, how can they possibly keep that energy of the first song? Somehow they managed to do so.

The Femmes of Rock is led by Nina DiGregorio. She dresses in a heavy metal manner similar to that as the Kelly Bundy character, but can play a heavy metal violin. She shreds on the instrument and moves in such a powerful way. This wild child is much more than a pretty face. Her abilities are amazing to see and hear especially with such an amazing band behind her.

Four beautiful women playing violin with a rock band is just something to see. The idea brings classic rock music and a burlesque style show to the stage. The amazing talent and collection of songs selected was all just a perfect combination.

Earlier in the day they were on WGN’s channel nine in Chicago. They played their cover of “Eleanor Rigby” and it was just a version that was remarkable. The choppy swipes at the strings were done so with good mechanics in an almost robotic sort of way. Of course, they played this one at the show as well.

A major highlight of the evening was their cover of the Queen song “Bohemian Rhapsody.” The girls sat down and sang out the song. It was a very beautiful vocal moment that led into violins playing one of the most popular songs ever.

The long jam at the end goes through some of the best guitar solos from the classic rock era. One guitar god after another was displayed out on violin. Music from Deep Purple, The Eagles, AC DC, Pink Floyd, Led Zepplin and many more!! They played a full show, but it ended too soon; left the audience wanting more. Everyone wants to see more of a good show.

The incredible venue of The Arcada Theater does it again by bringing some of the best shows to downtown St. Charles, Illinois. The monumental size of a show that Femmes of Rock with Bella Electric Strings can bring to the stage is amazing. The pure talent is packed into a fun filled night of fast paced violin runs that was a pleasure to see.